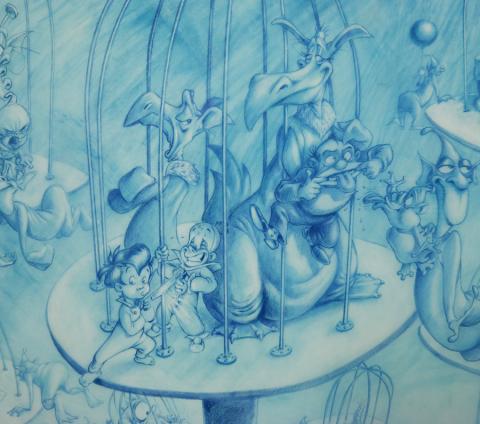 This is an original concept drawing used to develop and pitch a television series based on the classic Winsor McCay comic strip, Little Nemo in Slumberland. In the 1980s, a feature film of the character was created as a joint venture between a Japanese animation studio and an American animation studio. The film was released in Japan in 1989 and was very well received. The great response encouraged the studios to begin development of a series based on Nemo's adventures. Unfortunately, the film did not show in the United States until 1992, and did not meet the same fan fare as Japan. Due to the disappointing box office in the United States, the studios decided to cease production on the series. This concept is one of very few pieces ever seen used in the development of the series. The imagery is absolutely stunning and is created with blue pencil on a light tracing/onion skin type paper. The overall sheet is quite large, measuring about 19" x 24" with the lovely image measuring 17" x 21". The drawing is in very good condition overall with some light wear and wrinkling due to the large size and delicate paper.