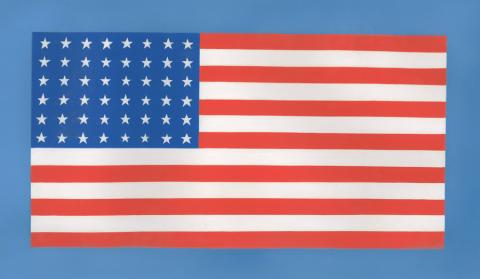 This is an original production background from the Warner Bros. Studios production The Incredible Mr. Limpet (1964). The hand-painted background features the 48 star flag that was used during Limpet's dream sequence as a transposed background behind a live action General Limpet. It was created at the studio and used during production for part of the superimposed imagery in the montage. Backgrounds from the film are extremely rare. The overall measurements of the background are 12" x 21" and the image itself takes up the entirety of the background. The setup is in very good condition with surface scuffs and pin holes in the corners. Professional restoration is available, please ask for more information. The final image shown is a screen grab from the film that is shown for reference of the scene this cel was used in, and it is not a physical print included with the artwork.