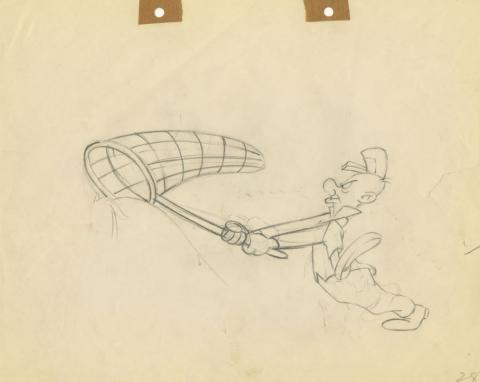 An original production drawing from the Warner Bros. Studios animated short film Fair and Worm-er (1946). Featuring an image of the dog catcher in mid-swipe, the drawing was created at the studio and used during the animation process. Measuring 9.5"x12" overall, with the character image measuring 4.5"x9", the production drawing is in good condition with minimal creasing throughout, and edge wear including tears and flaking, notably on the right edge. Most artwork from the early years of Warner Bros. studios was lost or destroyed, making artifacts from these memorable cartoons an absolute rarity.