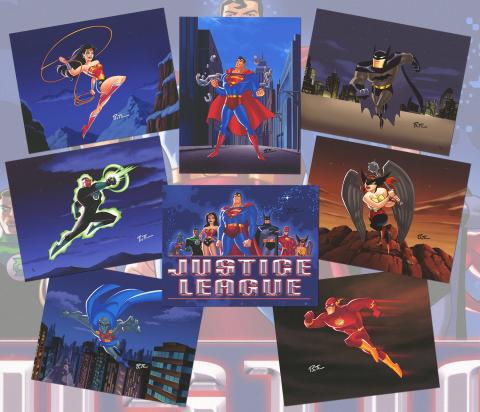 This is a set of 8 limited edition giclee on paper prints based on the Warner Bros. Studios animated series, Justice League (2001-2004). This set of limited editions was created in 2003 and features imagery of 7 of the most popular characters in the DC Comics Universe, Superman, Batman, Wonder Woman, Green Lantern, Martian Manhunter, The Flash, and Hawkgirl. When this limited edition was created, the character prints weres sold as individual pieces, but the lower numbesr in the edition were saved and paired together to be sold as sets that also included the exclusive Justice League title card. Each print measures 11" x 14" overall with the image area measuring 10.5" x 13.5" and each print is hand-signed by Justice League artist, Bruce Timm. All of the prints are in excellent condition.