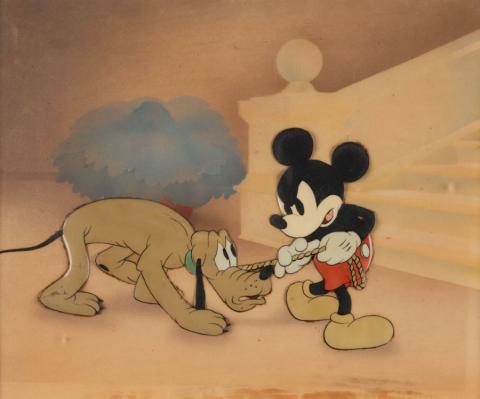 An original production cel from the Walt Disney Studios animated short Society Dog Show (1939). Featuring Mickey Mouse pulling Pluto to be evaluated at a dog show, the single cel captures Mickey appearing more angry towards Pluto than how he appears in the rest of the cartoon. The cel is an actual frame of animation that was created at the studio and photographed to appear in the cartoon. The piece was originally set up by the studio for the Courvoisier Galleries with the characters trimmed to the image and applied to a custom air brushed background. The presentation is common for Courvoisier setups, with the custom background differing from the actual background that appears in the film. Meauring 16"x18" framed with a mat opening of 6"x10", and a character image that measures 5" x 8", the cel is in good condition considering its age, with some paint lifting throughout and cracking in Pluto's back left leg. The piece is left unrestored to preserve the original paint.