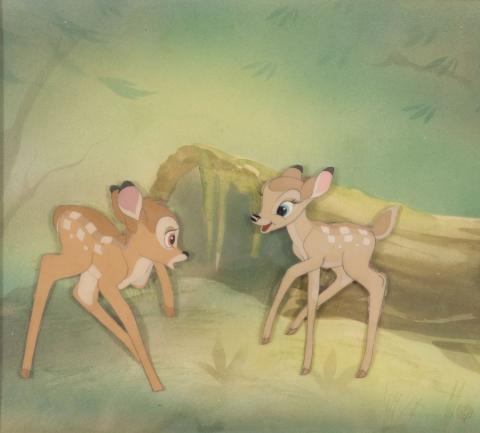 A captivating production cel from the Walt Disney Studios animated film Bambi (1942). "Hello, Bambi. Don't you remember me? I'm Faline." The innocent love portrayed between Bambi and Faline, starting with their youthful introduction, is a heart warming depiction of the growth of adolescence. Featuring Bambi and Faline caught in this nervous flirtation, the hand-painted cel was created at the studio and used during the animation process. The piece was originally set up by the studio for the Courvoisier Galleries with cels trimmed from actual frames of animation that were photographed and appear in the film. Measuring 16.5"x16.5" framed, with the mat opening measuring about 7.5"x8.25", and with the character image measuring 4"x6.25", the setup is in very good condition with some light rippling to the cel layer due to age and wear to the frame from storage. The cels are trimmed to image and applied to their custom watercolor background as they were originally prepared for the Courvoisier Galleries.