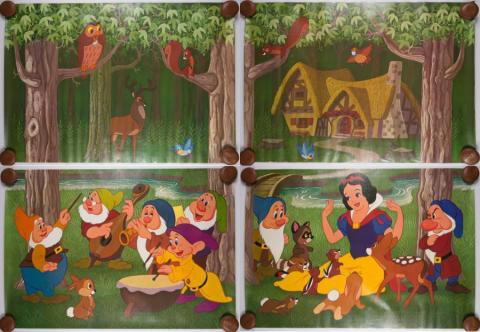 A large wall decoration inspired by the Walt Disney Studios animated feature, Snow White and the Seven Dwarfs. The wall decal is created in four separate 34"x48" panels that can be lined up to make one large 68"x96" image of Snow White and the dwarfs outside of the cottage. The print was produced in the 1970s by a West German company named Selecta, in a style similar to a wallpaper with the image printed on a canvas textured vinyl fabric. The wall print is in very good condition with some water damage visible on the reverse that does not come through to the front of the image, and the print is still in its original distribution box which has some wear and tape present.