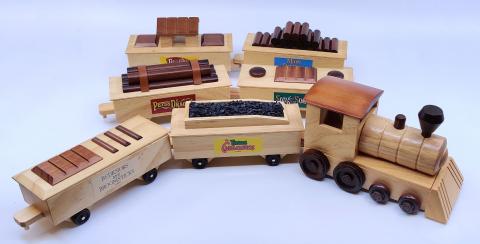 A full limited edition set of Disney Fossil watches from the 1990s. The set, entitled "Walt's Train," features seven wooden train car pieces that each contain a watch. The engine car contains a pocket watch with a 1952 publicity photo of Walt Disney surrounded by Mickey & friends. The remaining six train cars and watches feature titles and images from Mary Poppins, Song of the South, The Three Caballeros, Bedknobs and Broomsticks, Pete's Dragon, and Who Framed Roger Rabbit. The set of watches has not been tested. When connected together, the set measures approximately 4.25"x48" and 4" tall. The engine measures 4"x8" and 4" tall with the remaining six cars measuring about 7.5"x2.5 and 2" to 4" tall. The set is in good condition with some wear from age and storage.