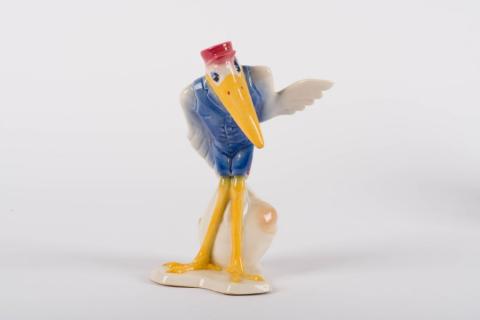 A rare ceramic figurine inspired by the 1941 Disney Studios film Dumbo. The figurine features a highly detailed rendition of Mr. Stork with one wing extended, hiding a bundle of joy behind his back. The elegant piece was produced by Vernon Kilns in 1941 and measures 6”x4” and 8.75” tall with a "42" stamped on the underside. Mr. Stork is in very good condition with some small bubbles in the glaze from production. These early ceramics from the time of the film's original release are hard to find and treasures to behold.