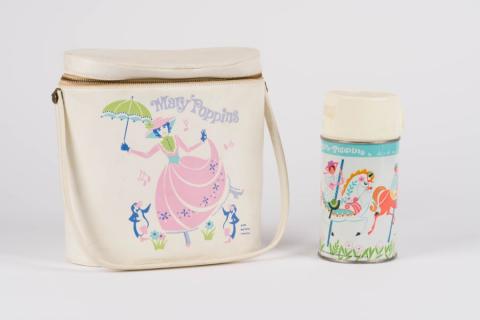 A rare vinyl lunch box set produced during the theatrical release of Walt Disney's Mary Poppins in 1964. The zippered, soft lunch box was a popular style in the 1960s and 1970s, and features a printed image of Mary with two of the penguins on the front. Enclosed in the lunch box is a plastic Aladdin Thermos with an image of Mary, Jane, and Michael on the carousel horses. The lunch box measures 8"x4" and 8" tall, and the set is in good condition with some discoloration throughout the bag and thermos from age.