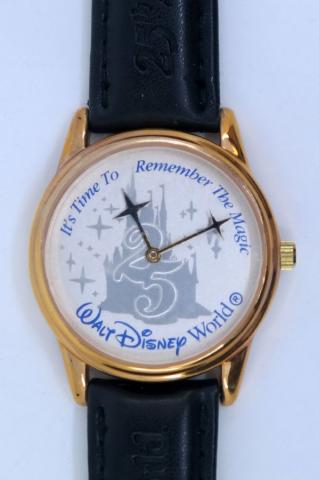 A commemorative wrist watch created for the 25th Anniversary celebrations at Walt Disney World. The celebrations began on October 1, 1996, and ended in January of 1998. The face reads “It’s Time to Remember the Magic, Walt Disney World,” and features a silver silhouetted image of Cinderella’s castle with the number 25 imprinted on it. The genuine leather straps also have the text “Walt Disney World” & “25th Anniversary” stamped onto them. The watch measures 9” long and is in very good, untested condition. The battery will need to be replaced for operation.