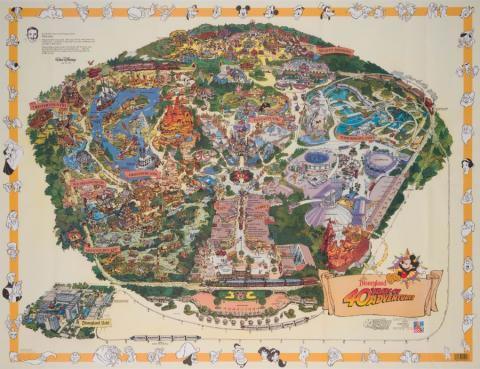 A large souvenir map of Disneyland from 1995. The 40 Years of Adventure campaign tied the park's anniversary promotions in with the promotion of the highly anticipated Indiana Jones attraction. Featuring a border with many beloved Disney characters and a 40th Anniversary banner in the lower right-hand corner, this is the second release of the 1995 map, after the first was released with several errors. The map also features the first appearance of Mickey's Toontown and Indiana Jones Adventure, as well as the last appearance of the PeopleMover. Measuring 27"x34.75", the map is in very good condition with some wear along the fold-lines and minor edge-wear.