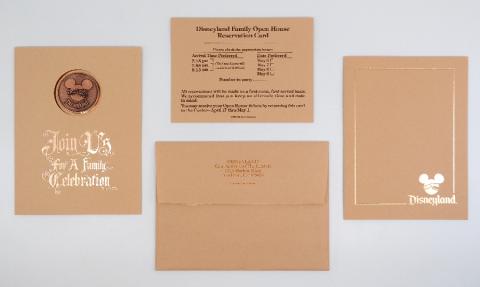 This is an unused invitation from the Disneyland 30th Anniversary Family Open House in 1985. The set contains the original envelope which was sealed and torn open, the invitation with its 1.5" diameter commemorative 30 year medallion, an RSVP response card, and a Polaroid photograph holder. These materials were likely samples that weren't actually sent out, and there are slight differences, there is no addressing on the envelope, and the photo holder would have likely been distributed at the event and not in advance. The envelope measures 4.5" x 6" and the materials fit snugly inside (except the photo holder which is a little too big - supporting the thought that this was not distributed with the invitation). The materials are in very good, unused condition, except the envelope which does have wear from being sealed and reopened. We have a couple sets of these, and the condition of the envelope varies slightly on each, as seen in the images. The only other difference is that one invitation does not have the gold foil circle that is behind the medallion on the invitation, and that invitation is paired with the envelope that is more torn than the other two.